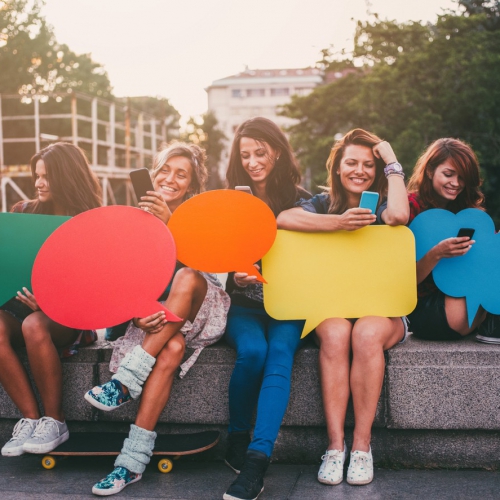 It all started with a tweet from Guardian columnist Rhiannon Lucy Cosslett:

“Older people, do you realise that ending a sentence with a full stop comes across as sort of abrupt and unfriendly to younger people in an email/chat? Genuinely curious.”

Cue predictable rage from, presumably, older people, resulting in Rhiannon deleting the tweet because she didn’t “want to be part of a bullshit culture war.” Can’t say I blame her.

A few days later the Daily Telegraph ran a story headlined, ‘Full stops can annoy Gen Z, warn linguists’. Other outlets had similar pieces, the general tone being that the youth of today are on the slippery slope to complete illiteracy with their texting and wilful disregard for the norms of grammar and punctuation.

Speaking as someone who likes shopping at Waitrose primarily because they brand their short queue lane ‘six items or fewer’ when other supermarkets use ‘less’, I’m as guilty as the next old fart of complaining about texters and Instagrammers and their lack of capital letters and commas.

But punctuation as a weapon of disapproval?

I asked my in-house Gen Z-er (my 20 year-old son) who confirmed that yes, if you end a chat with a full stop it generally means that you’ve had enough and you want to bring the conversation to an end.

I had no idea. As a writer, I relish the fact that language evolves, words and phrases fall out of use and hard-and-fast rules are ripped up on a regular basis.

But performing verbal gymnastics in order to adhere to some arcane grammatical directive — and losing the rhythm and meaning of your narrative in the process — can never be a good thing. And so those rules are generally ignored except in the most academic of texts.

They were ignored in my last two sentences, for a start.

Linguistic transition over the last decade has accelerated. Generation Z — the irritating name given to those born between the mid-1990s and the early twenty-teens — are perhaps the first for whom short form writing (texting, snapchatting and tweeting) is their default.

Despite learning to write neatly in primary school, the smartphone keypad is much more important to them than legible handwriting when it comes to getting their point across.

What strikes me as different about this generation is how they can use punctuation almost as performance art — summed up in this discussion noted by writer Deanna Hoak:

“It’s kinda cool how our generation has created actual tone in the way we write online. like whether we: write properly with perfect grammar, shrthnd everythin; use capitals to emphasise The Point, use extra letters or characters for emotion!!!!! and much more — it means we can have casual conversations, effectively make jokes using things like sarcasm that’s usually hard to understand without context and much more. this “incorrect English” has really opened avenues of online conversation that isn’t accessible with “correct English” which is pretty interesting”

“My class literally taught some of the nuances of this to our english teacher, things such as the difference between “yes” and “yes.” or “..” and “…”. It makes perfect sense linguistically that we would create this complexity to ease communication in a medium without body language and tone, but what my teacher was really floored about was that none of this was ever “learned” it, we’re “native speakers” of a whole new type of English.”

(As I typed this out, verbatim from the source, not only I but MS Word’s autocorrect function had to be forcibly restrained from ‘correcting’ the lack of capitalisation of personal pronouns and the start of sentences.)

Now I have no idea what the difference in meaning is between ‘..’ and ‘…’, but it’s undeniable that this type of communication is almost as physical as it is verbal.

In this new world order, full stops are things that can literally stop you in your tracks, not just devices to indicate taking a breath or to delineate between what came before and what comes after. A complete lack of punctuation can be used to convey excitement, the way we actually speak when we can’t wait to tell our news.

I discussed this ‘Newspeak’ phenomenon with copywriter friends in our Slack group, most of whom could probably be categorised as ‘Millennials’ (the generation before Z).

They came up with other examples that they, despite being closer in age to the perpetrators than I, also found bewildering.

For example: “Thinking of my younger sister. She NEVER uses full stops in our whatsapp messages, but when she does, I know she’s trying to communicate in a different way.”

‘kk’ is another one we couldn’t quite pin down. It’s another way of saying ‘OK’. But what’s wrong with OK — itself a contraction? What does KK mean that OK doesn’t?

Another ‘rule’ that emerged during our Slack discussion was never, EVER, add a full stop after an emoji ❌. Yes, that. Don’t do that.

Perhaps more importantly, don’t use lots of emojis in a sentence. UX writer Laura Parker pointed out that, “Emojis can be inaccessible for people using assisted technology (screen readers). Especially if you use more than one. The screen reader reads the emoji description.

Personally, I find the whole thing fascinating. I’ve always loved finding out new stuff, and I don’t think you’re ever too old to learn.

You could even say it helps keep you young 👶

Thanks to all in the Freelance Slack Group who helped with ideas and comments for this blog.